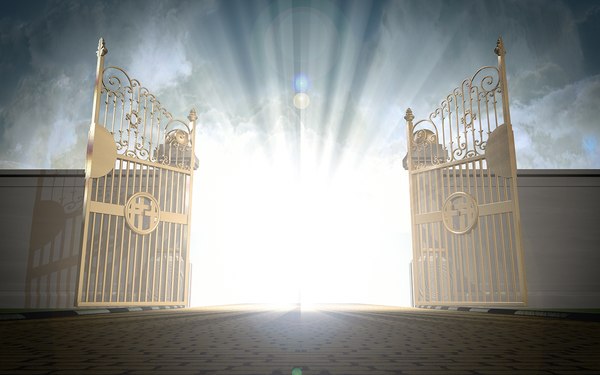 A guy I was listening to on Facebook Live said something that made me cringe. What he said didn’t take me by surprise—I’ve heard this kind of thing before. But every time someone says it, I have the same gut reaction.

So, what did he say?

“Christians are trying to get to heaven.”

Did you catch it? Maybe you didn’t. Let me help you out. He didn’t say Christians are going to heaven; he said they’re trying to get to heaven. Big difference. What’s most disturbing, a simple Google search turns up several gospel songs in which the phrase appears in the lyrics. So, not only has it worked its way into our mouths, it’s wormed its way into our music.

To be sure, the phrase may be nothing more than a harmless cultural idiom. Perhaps I’m overreacting. But then again, the phrase is theologically bankrupt and we’d do better to get rid of it altogether. The truth is, many professing Christians mistakenly believe that heaven is a place to be earned. The idea is that you believe in Jesus, become a Christian, and hope that you do enough good and avoid enough evil. And when it’s all over, if your good outweighs your bad, then you get to go to heaven. That’s terrible theology! Christ died not for the good but for the bad (Rom. 5:8). It wasn’t when we were strong but when we were weak that Christ died for the ungodly (Rom. 5:6). It was Christ who suffered once for sins, the righteous for the unrighteous (1 Pet. 3:18).

Now, all this talk of Christ suffering and dying was to save us from sin. And let me tell you, you and I were steeped in it. Dead in our trespasses is what we were (Eph. 2:1). Unable to save ourselves. Left to the consequences of our own disobedience and facing God’s wrath (Rom. 1:18). But God in His mercy saved us—and it wasn’t because of any good deed or deeds we had done (Titus 3:5). That would be impossible anyway because our righteousness is no more valuable than a filthy menstrual cloth (Isaiah 64:6). God had to step into our situation. And that’s exactly what He did. When the time was right, God sent Jesus into this world to redeem us from sin (Gal. 4:4-5). So then, we are saved by grace through faith in Christ (Eph. 2:5).  And, not only that, but listen to what else Paul says about this wonderful salvation in Ephesians 2:6: “[He] raised us up with him and seated us with him in the heavenly places in Christ Jesus.”

There you have it, folks. Seated with Jesus in the heavens. The reality is so certain in Paul’s mind that he can speak of it as a present possession. In other words, heaven comes with the package. It’s not as if you get saved and, depending on whether you’re good enough, get heaven tacked on as a bonus.

Recently, my father-in-law had given me two tickets to a Detroit Lion’s preseason game. At the time, the game was a couple days away. Was I ever nervous about not being able to get into the stadium? Did I ever imagine being stopped at the gates and being denied entrance? Didn’t even cross my mind. Why not? Because I had a ticket. That ticket—assuming it was genuine and not a phony—was good for admission. And so it is with Christians. Our ticket of admission into heaven is the righteousness of Christ (2 Cor. 5:21). And if we’ve got that ticket, we need not fear being denied heaven’s gates.

I think I know what people mean when they say they’re trying to get to heaven. They mean that the nagging presence of indwelling sin robs them of the assurance of salvation. And, therefore, they question if they’ll ever make it through. But thank God, our perseverance in the faith isn’t based on our performance (Gal.3:3). Ultimately, it’s not we ourselves who keeps us. Instead, it’s God who sees to it that we endure to the end (Jude 24; Phil. 1:6).

But does this mean Christians can live any way they want and still go to heaven? That’s a loaded question, of course. By definition, a Christian is a person who’s truly been born again. And if it’s true that the truly born again will persevere to the end, then it’s also true that only those who persevere to the end have been truly born again. You get all that? In other words, those who fall away prove that they weren’t saved to begin with (1 John 2:19). While a Christian can certainly backslide (Is. 57:17), a true believer will eventually repent (Psalm 51).

So then, are Christians trying to get to heaven? No. Heaven already belongs to us. We have our ticket. And none can wrest it away from us. Neither death nor life, nor angels nor rulers, nor things present nor things to come. If you’ve come to trust Jesus as Savior, your future is secure. Jesus promises you that: “If it were not so, would I have told you that I go to prepare a place for you” (John 14:2)?

So, here’s a better song to sing:

When we all get to heaven,

What a day of rejoicing that will be,

When we all see Jesus,

We’ll sing and shout the victory.